How to Prioritize and Reschedule Landscaping Jobs During Peak Season 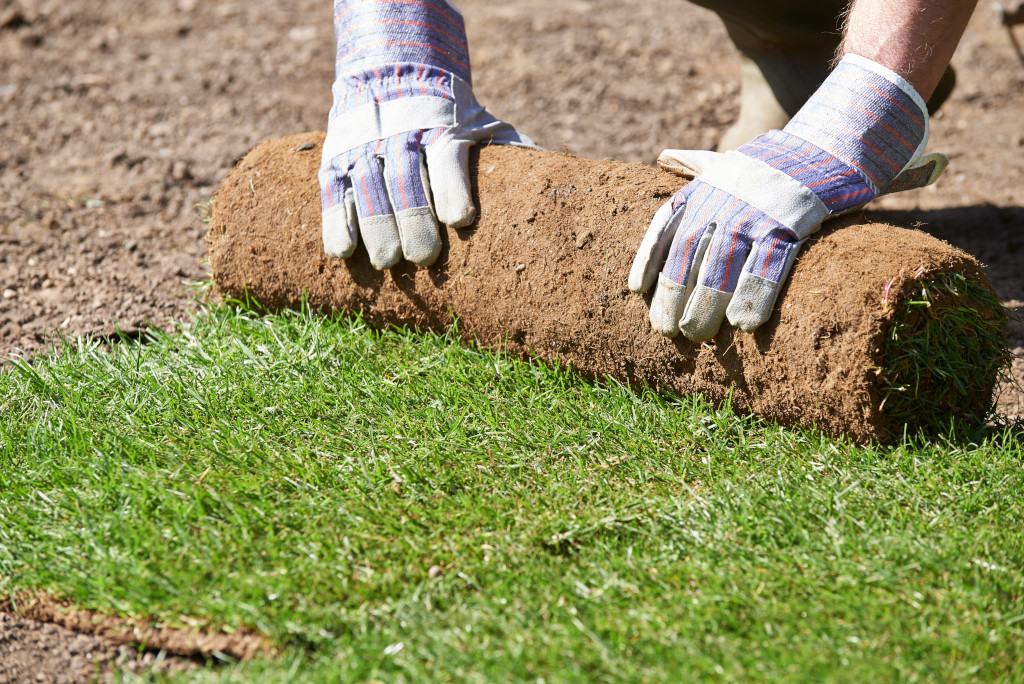 Finding the right way to prioritize landscaping jobs during the peak season can be difficult. Imagine this – you’ve scheduled everything to perfection. Your workers know where to be and when. All your plant materials are ready to go… and then a storm rolls in. Or a truck breaks down, or any of the million unanticipated possibilities occur.

In spite of your best efforts, you might have to prioritize between jobs to manage the unexpected. How do you decide where to concentrate your efforts and when to reschedule landscaping jobs during peak season? Read the full post to get some ideas!

pplying the Eisenhower Matrix to Landscaping

There are many prioritization models that you can use in your landscaping business. An excellent option to start prioritizing better is the Eisenhower Matrix. This model uses four different elements to categorize the value of tasks, but it can easily be applied to landscaping jobs as well.

Example: Example: A large, confirmed job from one of your largest customers.

This is valuable in both the short and long term. You need to resolve the issue quickly for the sake of the job itself. Moreover, a good resolution means the client will trust your services in the future. 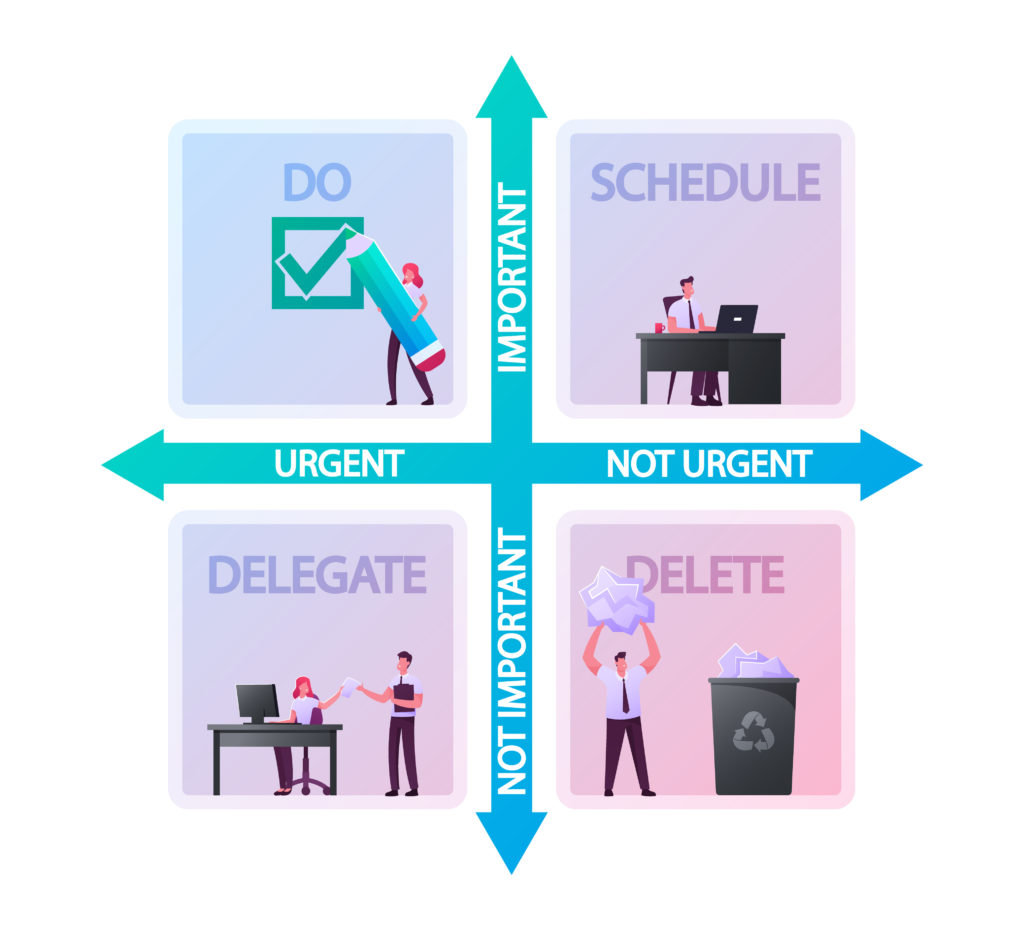 Important, but Not Urgent

Example: A large quote request for a future job from one of your large customers.

This is an important challenge to address, as it affects the long term success of your landscaping business. That being said, you don’t need to stop what you’re doing in the middle of the day for this one. Schedule time for this later.

Urgent, but Not Important

Example: A small job from a one-time customer.

Every customer matter, and it’s important to leave a good impression. However, do you personally need to oversee each job? Maybe you can delegate this.

Neither Urgent nor Important

We don’t even need an example for this one. If it’s not urgent, and it’s not important, you don’t need it on your mind during the busy season.

Prioritize Landscaping Customers Based on 80:20 Rule

When you have to drop the ball, the 80:20 rule will pinpoint where to let go and where to hold the fort.

Generally, 80% of your revenues come from 20% of your customers. Finding those 20% and prioritizing them regularly can help you not only build lasting relationships but also maximize your profits.

Of course, this rule only works on existing customers. For example, would you de-prioritize a small ‘pilot’ order from a potentially large customer? It’s important to analyze what each possibility would mean for your landscaping business’ reputation and for your profits in the long run.

sk Your Friend a Favor Method to Prioritize

Capitalizing on rapport is a way to prioritize new landscaping clients and grow your business without risking your reputation with existing clients.

A client who trusts you can be more flexible. For example, if John Landscaper makes up a significant amount of your business that also means you work with him often and have ideally built a good rapport. In a pinch, he may be open to rescheduling.

**Be warned though, playing this wild card too often will destroy relationships with loyal clients.

Before you prioritize your landscaping jobs, it’s always good to consider the collateral damage that comes from rescheduling. For example, some plant materials need to be planted right away, or be left in the care of people who know how to tend to them. Landscaping jobs are also often reviewed by inspectors who work on a schedule. Furthermore, your business might rely on third party equipment rentals to move large trees or work with various terrain. You don’t want to create a ripple effect that compromises your profits.

2.   Communicating After You Prioritize Your Landscaping Jobs

You’ve done the math and chosen which jobs to reschedule. Now, keep these pitfalls in mind when you communicate with your client.

In the business world, we default to thinking in the binary of winning or losing. Unfortunately, effective communication isn’t black and white.

Scripted escalation is when you attempt to discuss a minor disagreement, but it is interpreted in the worst way possible and the situation derails.

Landscaper: “Although we won’t be able to deliver the plants by tomorrow like we said, we’ll give you a deal on the foxtail fern and other materials.”

Client: “That’s not ideal, but I guess we’ll make due with the schedule change.”

Landscaper: “I know it’s not ideal, but it’s just a delay of a couple of days and we’ll get you some of the hottest plants on the market at a reduced price.”

Client: “Well actually, this is terrible. I wanted things wrapped up quickly and now you’re delaying my team.”

Here, the client was not enthusiastic about the initial news. Rather than de-escalate, the landscaper tried to make the client share his outlook. This in turn made the client pull farther away from the landscaper’s point of view. Although the client started off only mildly disappointed, the situation escalated into major opposition.

This could have been avoided with different framing.

When there are issues with a job, ‘frame the message’ in a way that highlights your empathy.

You and your client are two humans working to solve a problem. Don’t try to “win” the exchange when you have bad news.

This isn’t the time for dry diplomacy either. When you’re de-prioritizing a client, a healthy dose of understanding is the least you can offer.

You’ve broken the bad news, you’ve let the client down gently. Now you’re itching to leave the exchange on a high note. This part is where you overbalance to try and right a wrong. That can look like anything from agreeing to timelines that aren’t realistic or promising to source materials outside of your region.

Overbalancing leads to bigger issues. You’ve over-promised and might under-deliver. Those within the landscaping industry are no strangers to unexpected delays. Make the required schedule changes with your clients in an earnest way and leave it at that.

3.   Internal Re-prioritization: ‘Did you not get the memo?’

Finally, it’s time to get your team on track.

Communicate in full transparency with your crew and suppliers as you resolve your priorities. Everyone needs to be on the same page to ensure job delays don’t snowball into greater issues and lead to profit loss.Update all changes in your landscape management software and any other tools your landscaping business uses.Reroute or reorient third-party resources (drivers, city inspectors, plant brokers).

Rescheduling landscaping jobs is a multi-faceted endeavor. Between planning, communicating, and executing the required changes, you’re spending time you don’t have during the July busy season.

Delegate tasks within your team, team-up with other landscaping businesses, and reach out to partners like GoMaterials to overcome the challenges of the season.

Is the business too stressful this time of the year for you? Take part in our survey to let us know!

The post How to Prioritize and Reschedule Landscaping Jobs During Peak Season appeared first on GoMaterials. 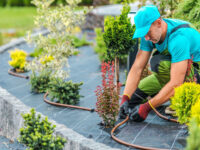 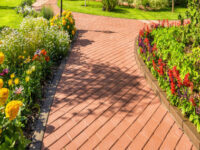 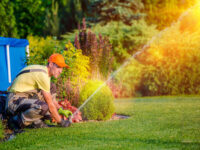 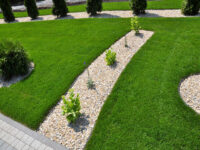 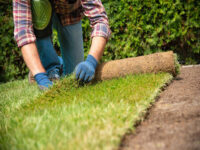